Postulate I: The state of a physical system is characterized by a state vector that belongs to a complex vector space $\mathcal{V}$, called the state space of the system.

Euclidean space (in 3-dimension for illustration) has the following properties:

The above properties more or less translate directly to state space.

Now, we move to some differences. Both Euclidean space and state space are subsets of Hilbert space, and thus are equipped with scalar (inner) product.

Notice that the scalar $c$ is now a complex number, which is one of the crucial differences of state space and Euclidean space. Now we look at the properties of scalar product in state space:

So the main difference comes from the fact that state space lives in complex vector space, rather than real vector space. Through the scalar product, we can define some basic notations for quantum mechanics:

With this basic notation equipped, let’s study a concept called “operators” in the next chapter.

Operators are mathematical objects that allow us to describe physical properties, such as position, momentum, and energy. Let’s start by the second postulate of quantum mechanics:

Postulate II: A physical quantity $\mathcal{A}$ is described by an operator $\hat{A}$ acting on the state space space $\mathcal{V}$, and this operator is an observable.

In other words, an operator acts on elements of state space $\mathcal{V}$, which are kets, and these kets are modified by the operator $\hat{A}$ in some manner. This can be written is $\hat{A} |\psi \rangle = |\psi' \rangle$, meaning that the operator $\hat{A}$ acts on the ket $| \psi \rangle$, which is modified to another ket $|\psi' \rangle$. It’s important to remember that the operators in quantum mechanics can act on the superposition of different states:

Before stating the properties of multiplication of operators, let’s start with its definition:

The non-commutativity of multiplication is one of the most important properties of operators in quantum mechanics. Due to this aspect, we also define commutators:

The non-commutativity of multiplication of operators, and consequently the notion of commutators play a fundamental role in quantum mechanics. Specifically, two operators that do not commute are associated with properties that cannot be measured simultaneously in a quantum system, such as position and momentum operators.

Now, we introduce the notion of the adjoint operator. Adjoint operator can be thought of as the dual of the operator introduced above, just like a ket corresponds to a bra in the dual space. We can write this as follows:

Adjoint operator is also linear, just like the operator introduced previously. With this notion, we can introduce some particularly important operators in quantum mechanics:

We close this chapter with some basic mathematical properties of operators:

Just like choosing convenient basis in Euclidean space leads to simpler notations, in quantum mechanics, if we choose convenient basis, it can simplify mathematical representations as well. We represent state space with an orthonormal basis. Orthonormal basis are mathematically defined as a set $\{ |u_i\rangle \}$ such that $\langle u_i | u_j \rangle = \delta_{ij}$, where $\delta_{ij} = 1$ if $i = j$, and $0$ otherwise (this is known as the “kronecker delta” function). Also, every ket in the state space, $|\psi \rangle \in \mathcal{V}$, can be respresented as a unique linear combination of the set $\{ |u_i\rangle \}$, i.e. $|\psi \rangle = \sum_i c_i |u_i \rangle$.

Since we’re working with orthonormal basis, it is quite easy to find a specific coefficient as follows:

Recall from Chapter 2 that an operator can be written as an outer product. In that sense, from the above, we can see that $\sum_i |u_i \rangle \langle u_i |$ is an operator (notice that I emphasized this with parentheses) that, given a state $|\psi\rangle$, returns the same state $|\psi \rangle$. Thus, we can also write $\sum_i |u_i \rangle \langle u_i | = \mathbb{I}$, where $\mathbb{I}$ is an identity matrix. This result is sometimes also called the “resultion of the identity (in the $\{|u_i\rangle \}$ basis).” Similar result holds for a bra $\langle \psi | \in \mathcal{V}^*$ :

Now, let’s look at how we represent operators. Recall the definition of an operator $\hat{A} |\psi\rangle = |\psi' \rangle$. Using the same $\{ |u_i \rangle \}$ basis as before, we can write down both kets as below:

Notice that we can write $c_i'$ in an alternative way as follows:

Using this alternative form of $c_i'$, we can write down the ket $|\psi'\rangle$ in a different form:

Therefore, we see that we can write the operator $\hat{A}$ as

With the above, we close this chapter, and thus part 1 of this blog post about basics of quantum mechanics. In the next part, we will study matrix formulation of quantum mechanics, how to change basis, and a particularly import basis called eigenbasis. 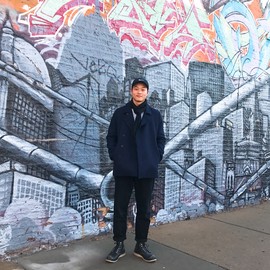